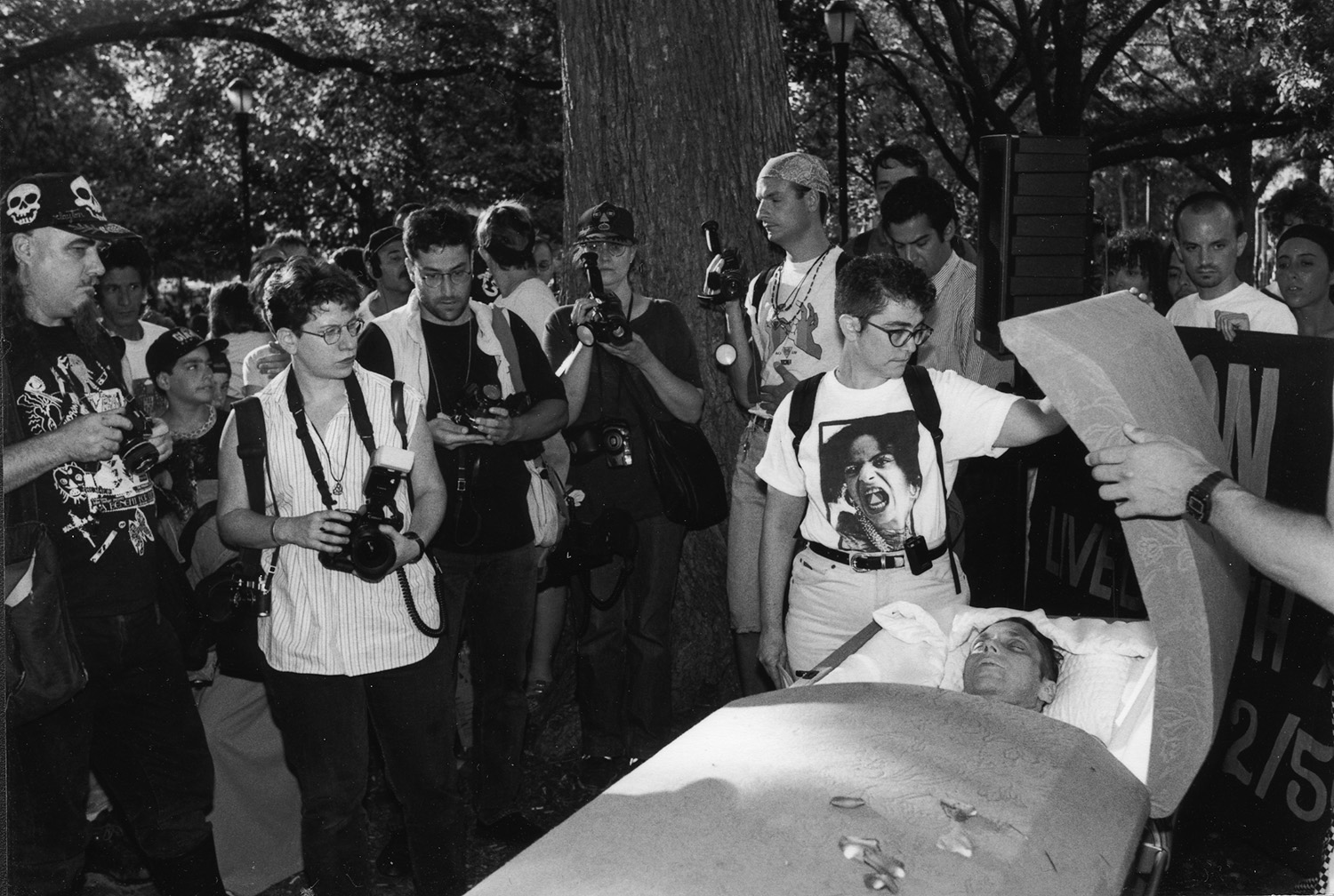 Photographers and activists gather in Tompkins Square Park at the public funeral of Jon Greenberg, an AIDS activist who died in 1993. 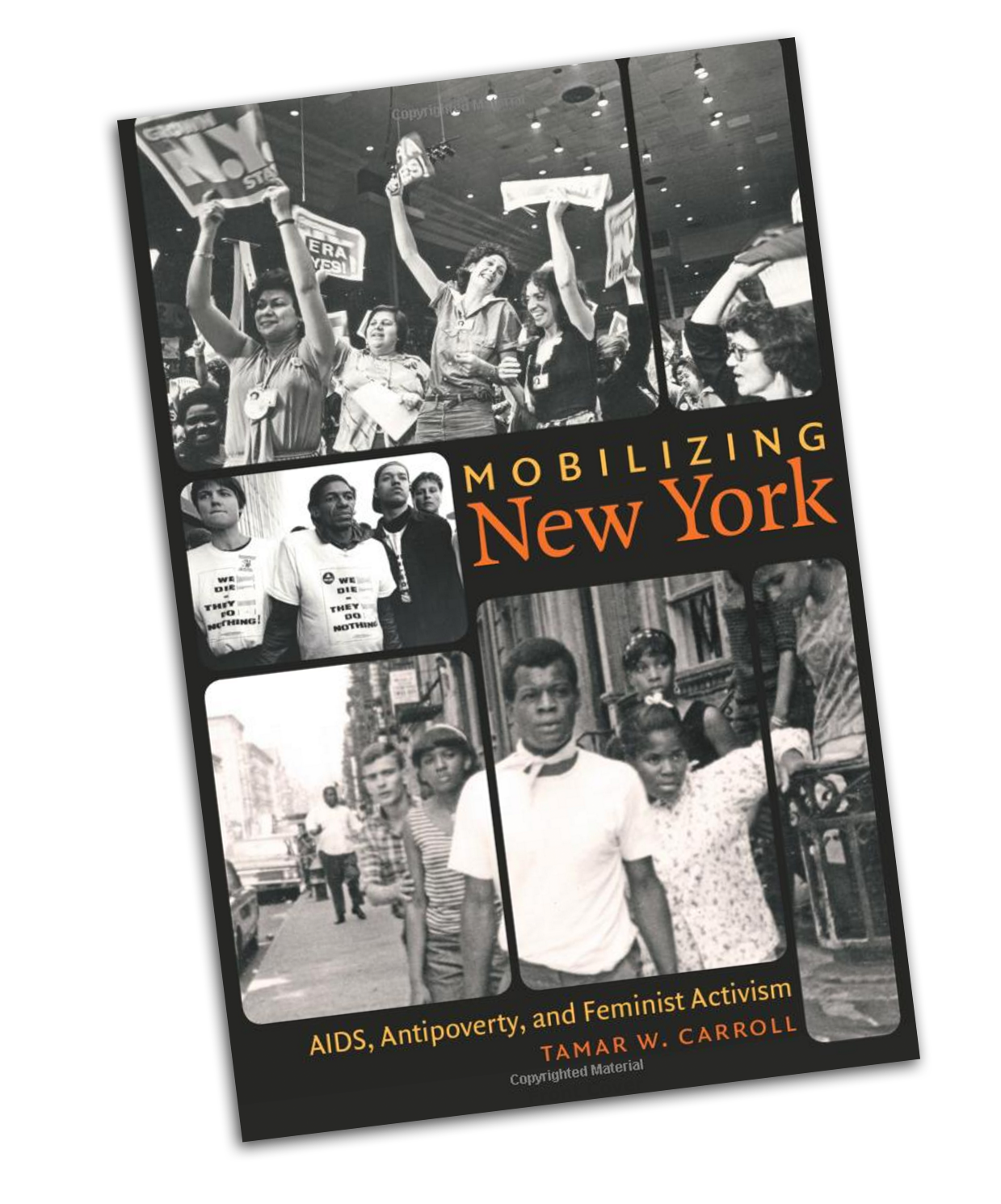 The University of North Carolina Press, 2015

Highlighting the little-known National Congress of Neighborhood Women, she reveals the significant participation of working-class white ethnic women and women of color in New York City’s feminist activism. Finally, Carroll traces the partnership between the AIDS Coalition to Unleash Power (ACT UP) and Women’s Health Action Mobilization (WHAM!), showing how gay men and feminists collaborated to create a supportive community for those affected by the AIDS epidemic, to improve health care, and to oppose homophobia and misogyny during the culture wars of the 1980s and 1990s. Carroll contends that social policies that encourage the political mobilization of marginalized groups and foster coalitions across identity differences are the most effective means of solving social problems and realizing democracy.

Read about the role of The Village Voice in publishing social documentary photography and listen to interviews with photographers who published their work in The Voice.

Historian Dan Royles explains the impetus for ACT UP’s staging of political funerals, which took mourning into public, in this essay. 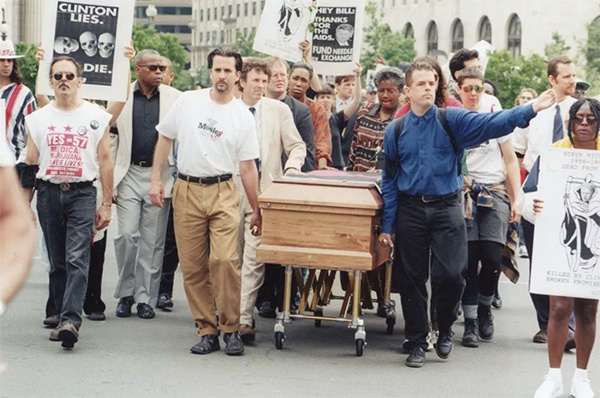 Since 1979 Clayton Patterson has dedicated his life to documenting the final era of raw creativity and lawlessness in New York City's Lower East Side, a neighborhood famed for art, music and revolutionary minds. Traversing the outside edge he's recorded a dark and colorful society, from drag to hardcore, heroin, homelessness, political chaos and ultimately gentrification. His odyssey from voyeur to provocateur reveals that it can take losing everything you love to find your own significance.

The Lesbian Avengers Eat Fire Too

Lesbian Avengers Eat Fire Too offers a rare insiders' look at the New York group's first year, from their initial groundbreaking demo in front of an elementary school in '92 to the incredible Dyke March in DC, where the Avengers ate fire in front of the White House, cheered on by an enormous crowd.

The video supplements footage of actions with compelling portraits of real life Avengers still giddy with their first experiences of taking to the streets as out dykes as well as hilarious interviews with puzzled tourists trying to answer the question, "Who are the Lesbian Avengers?" This film goes a long way towards providing an explanation.

More than a historical document, the video also offers important insights about how to organize successful actions and motivate participants. Released shortly after the Avengers exploded nationally in 1993, it was an essential tool for sharing activist skills and recruiting members. Even today, it inspires as much as it does instruct. If they can do it, I can, too.

A history of ACT UP

This film, by Jim Hubbard and Sarah Schulman, is a unique feature-length documentary that combines startling archival footage that puts the audience on the ground with the activists and the remarkably insightful interviews from the ACT UP Oral History Project to explore ACT UP (the AIDS Coalition to Unleash Power) from a grassroots perspective – how a small group of men and women of all races and classes, came together to change the world and save each other’s lives. The film takes the viewer through the planning and execution of a half dozen exhilarating major actions including Seize Control of the FDA, Stop the Church, and Day of Desperation, with a timeline of many of the other zaps and actions that forced the U.S. government and mainstream media to deal with the AIDS crisis. UNITED IN ANGER reveals the group’s complex culture – meetings, affinity groups, and approaches to civil disobedience mingle with profound grief, sexiness, and the incredible energy of ACT UP.

In March 1987, the first AIDS Coalition to Unleash Power (ACT UP) event took place on Wall Street. In the 15 years since the protest that shut down the world's financial center, ACT UP has been at the forefront of public awareness. Their demonstrations, die-ins, political funerals, marches, and speeches were key in propelling issues related to HIV/AIDS into major political and international topics. ACT UP member and AIDS video activist James Wentzy has constructed a vivid compilation documentary with Fight Back, Fight AIDS: 15 Years of ACT UP. The powerful clips depict the multiple bold events that ACT UP has staged, including: the inspiring First ACT UP action on Wall Street protesting the profiteering of the pharmaceutical companies that made AIDS-related drugs; National Nine Days of Rage, in which more than 50 ACT UP chapters congregated on the New York state capital to protest AIDS policies (or the lack thereof) involving IV drug use, homophobia, people of color, women, prison programs, and children with AIDS; and intense coverage of political funerals of ACT UP and affinity group The Marys, which included carrying an open coffin from Washington Square to the New York Republican Party headquarters on West 43rd Street, as well as an open casket political funeral in front of the White House. With fierce images and speeches, including many poignant ones by film historian and ACT UP pioneer Vito Russo, Fight Back, Fight AIDS is a dynamic alternative historical record of the queer political landscape, HIV/AIDS, and AIDS activist video. | TRIBECA FILM FESTIVAL |

In the mid-1980s, as AIDS panic led to rhetorical and physical attacks on gay men and lesbians, a group of graphic artists decided to take action as an art collective, calling themselves Gran Fury.

Their Silence=Death project was adopted by the AIDS Coalition to Unleash Power (ACT UP) as its logo, appearing on T-shirts, pins, and banners as well as the thousands of posters that Gran Fury wheatpasted across New York City. In their artwork, Gran Fury sought to challenge homophobic assumptions about AIDS, as well as to call local and national government officials to account for their failure to adequately respond to the epidemic.

Gran Fury’s poster “The Government Has Blood on Its Hands” called up the fear of contagion, particularly in the early years of the AIDS epidemic, and argued instead that the real culprit was poor governmental policy. Like the Silence=Death logo, the bloody handprints became a powerful symbol as activists repeated them on t-shirts, sidewalks, and walls across New York City.

All posters and photographs are from the Gran Fury Collection at the New York Public Library Digital Collection. 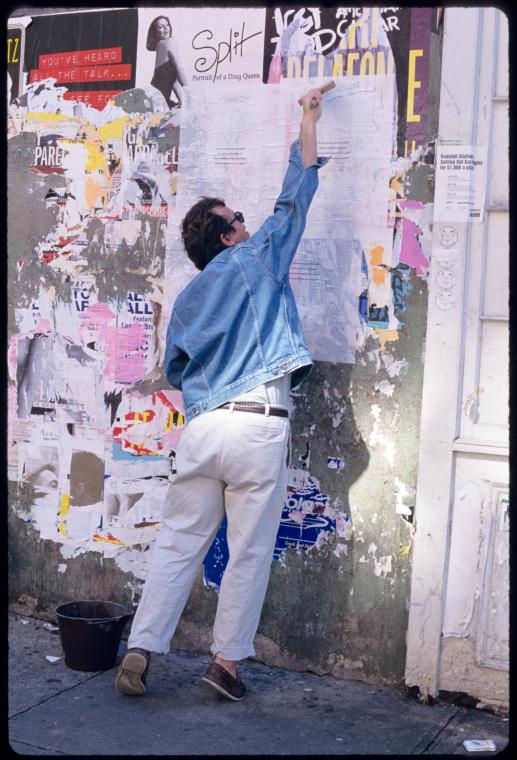 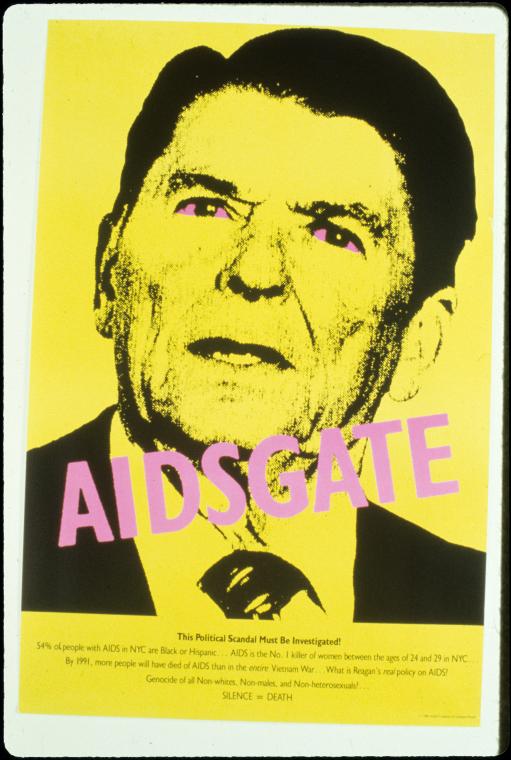 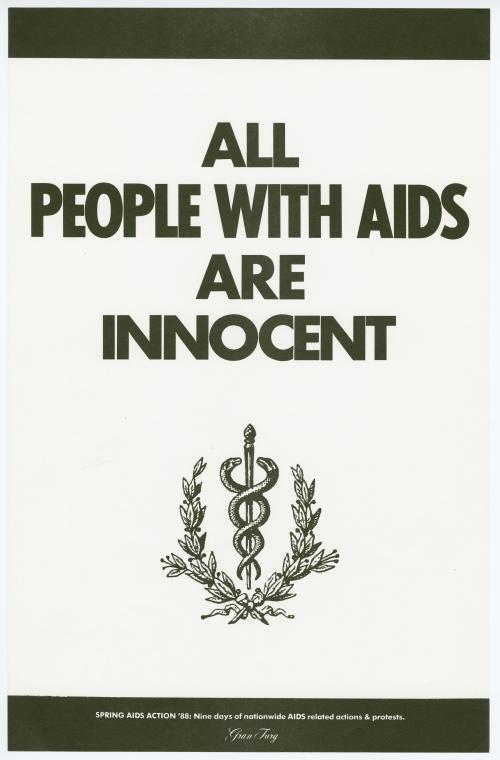 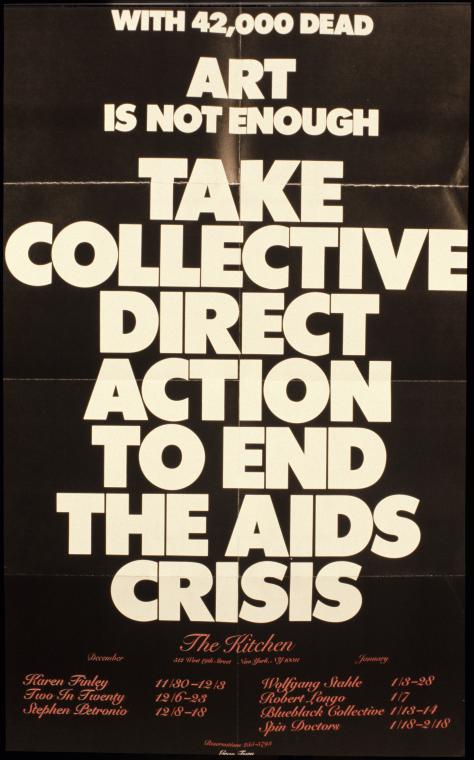 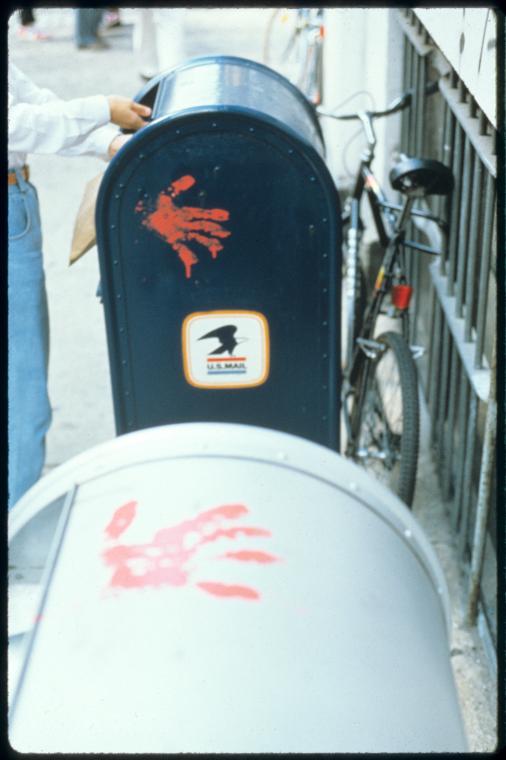 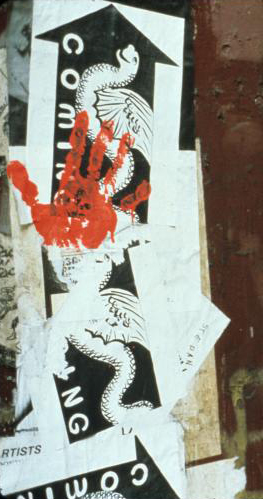 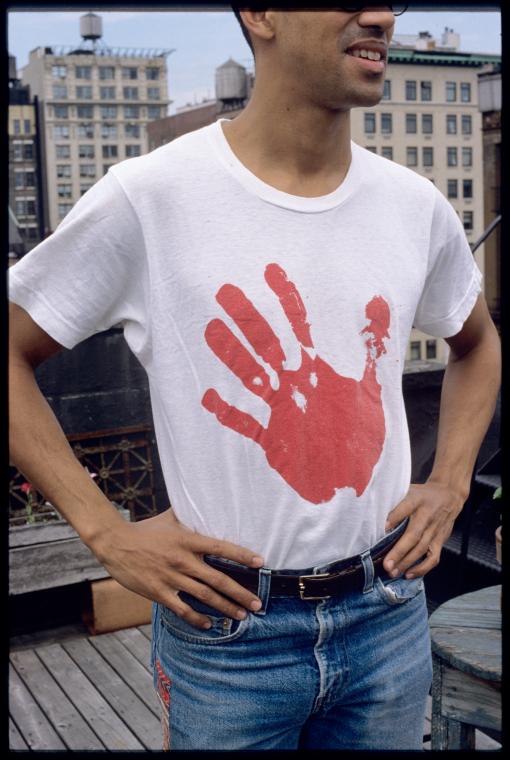 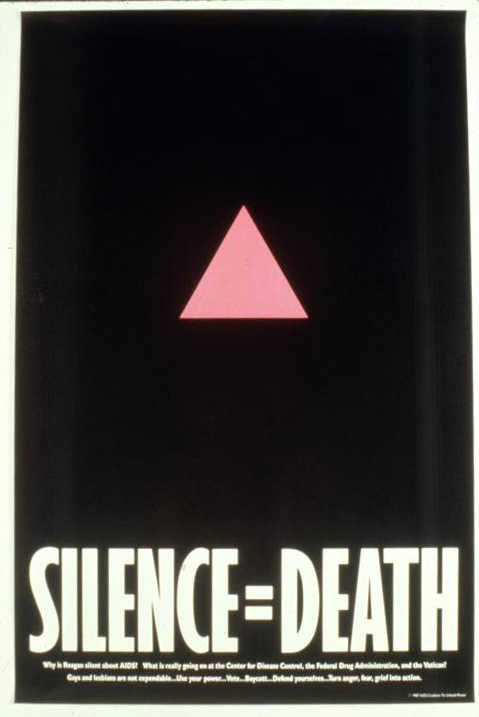 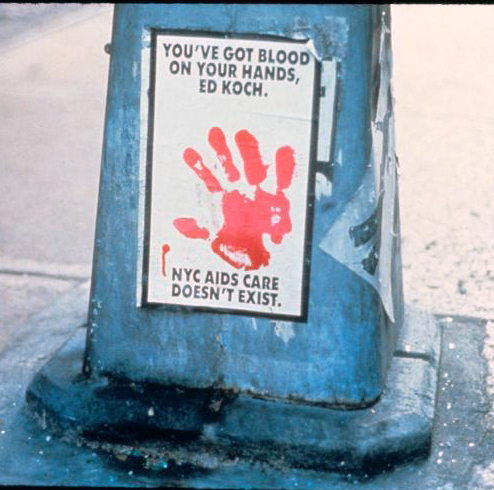 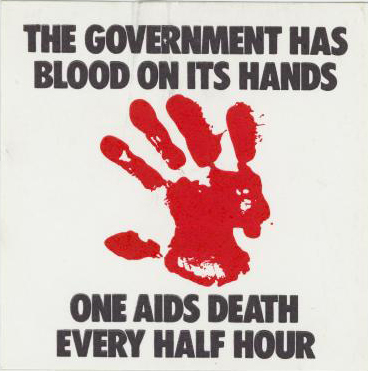 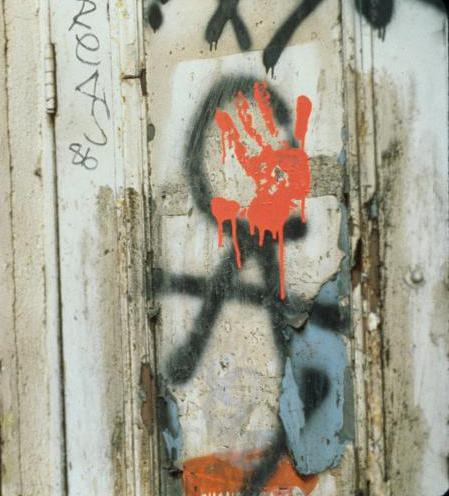 History of Housing Activism in NYC

The Metropolitan Council on Housing is a tenants' rights membership organization made up of New York City tenants who believe in the motto of "housing for people, not profit." They formed over 50 years ago to fight for a city where everyone has access to safe, decent, affordable housing. They organize tenants to stand up not only for their individual rights, but also for changes to our housing policies. 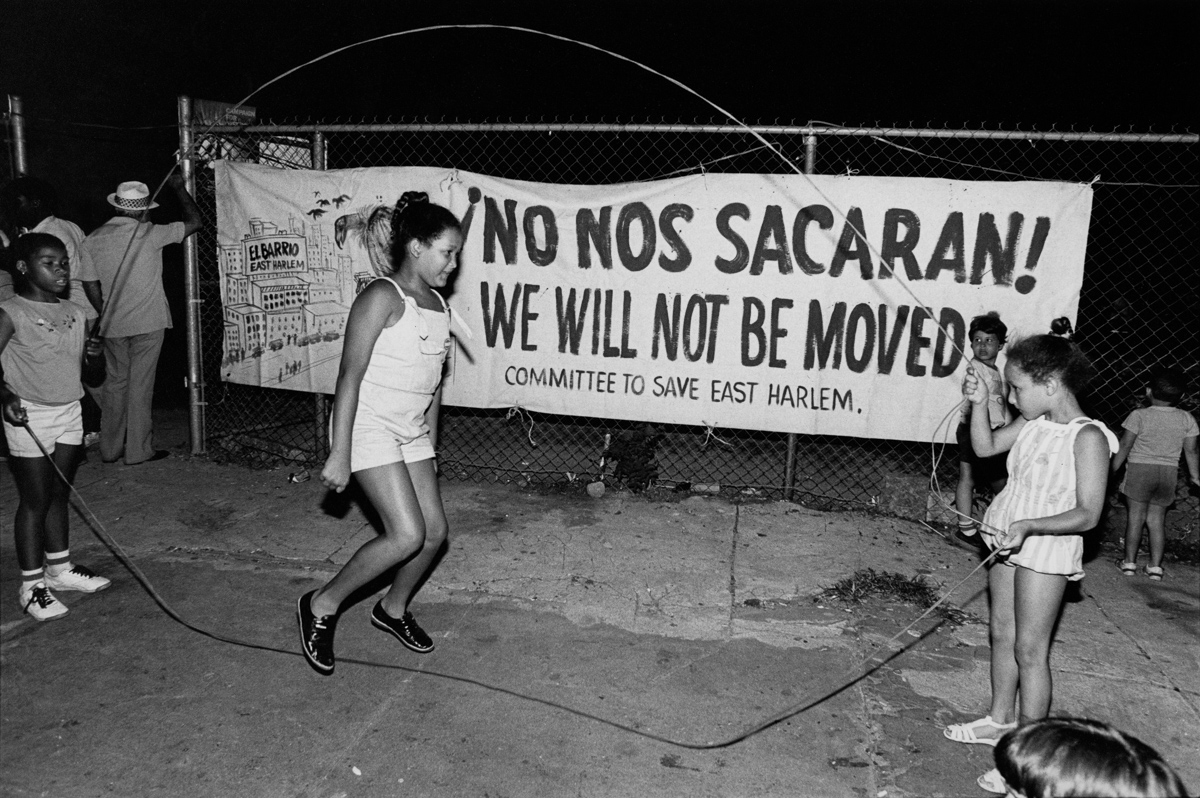